Home / Hold on and suck in, Miss Scarlett!Removing a plastic corset from a manuscript

Hold on and suck in, Miss Scarlett!
Removing a plastic corset from a manuscript

What to do with the most treasured document in our personal archive?
Mrs. Candela kept with love and care a letter that her recently passed away mom [1] had sent from prision, where she was retained for two weeks after joining the 1951 trams strike, in Barcelona, during Franco’s dictatorship. A very touching and personal letter, which is also a witness of this historical event.

How to freeze in time this valued mansucript? Thank God Internet gives us good advice: “protect your documents by laminating them“. Plasticizing the document seemed the best option: it would prevent the brittle letter from tears, fingerprints, possible mould damage, tide lines…  nothing less than perfect!
But fate had a major mishap against the preservation of this family legacy, because the laminating machine got stuck with the manuscript just inside it. The paper was ejected like a stunted accordion, making it impossible to properly unfold it since some of the folds were stuck with each other. Moreover some paper spots got burnt in the most heated areas.

Left: Digital simulation of how the paper might have entered, and was ejected from the laminating machine. Right: How the letter came out, with folds stuck with each other and losses on the bottom right corner of the manuscript.

Mrs. Candela was horrified with that irreparable damage… because, was it possible to revert that mess? Neither I had a clear opinion about it, since that was the first time I was given such a commision, a real professional challenge.

What do conservators know about plastics? We use them under the shape of Reemay®, Hollytex® and Tyvek® (for polyethylene), Mylar® and Melinex® (for polyethylene terephthalate), Teflon™ and Gore-Tex® (for polytetrafluoroethylene, PTFE [2]), and more often than it should be, we come accross biaxially oriented polypropylene (BOPP), polyvinyl chloride (PVC) or even cellulose acetate in the shape of damned sensitive pressure tapes…

I must admit in my mind they were all set under the same label, that boresome section of organic chemistry. The very same section that provides us with both the most useful resources and the most gooey and sticky tapes… no need to say how different they can be!

The first think to know is that there are only two sorts of plastics (sounds easy enough, doesn’t it?): Thermoplastic, which can be deformed without suffering any chemical transformation when re-melted; and Thermoset, that cannot be melted back after being cured.

Second learnt lesson, and so much comforting for a conservator and delaminator, is that laminating pouches (or film) are formed by synthetic polymers of the first mentioned kind (thermoplastic). And this let us discern the possibility to transform that disaster into something different, preferrably better. These polymers are (and now the topic becomes slightly cumbersome): polyester, specifically polyethylene terephthalate [3] (PET); ethyl vinyl acetate (EVA) and -occasionally- polyethylene (PE).
Laminating film and pouches for documents are widely used and marketed, and therefore there’s an equally wide literature about it, which has quite easen the task [4]. Polyethylene terephthalate constitutes the stiffer part, while ethyl vinyl acetate the stickyest, the inner part of both pouches and film. Ethylvinyl acetate is also known as foam, the plastic used to infill conservation boxes.

But it isn’t explained anywhere how to deplasticize a laminated document, and at this point a more thorough research was needed, because theory is different from practice. Melting back by heating isn’t a very good idea because of PET’s melting point (500ºF), which surpasses by almost 50 paper’s ignition point (451ºF).
Using solvents seemed to be a more promising option, since literature mentions several possibilities: trifluoroacetic acid (TFA), hexafluoroisopropanol (HFIP), nitrobenzene, dimethyl sulfoxide (DMSO), tetrachloroethane, phenol… among others. 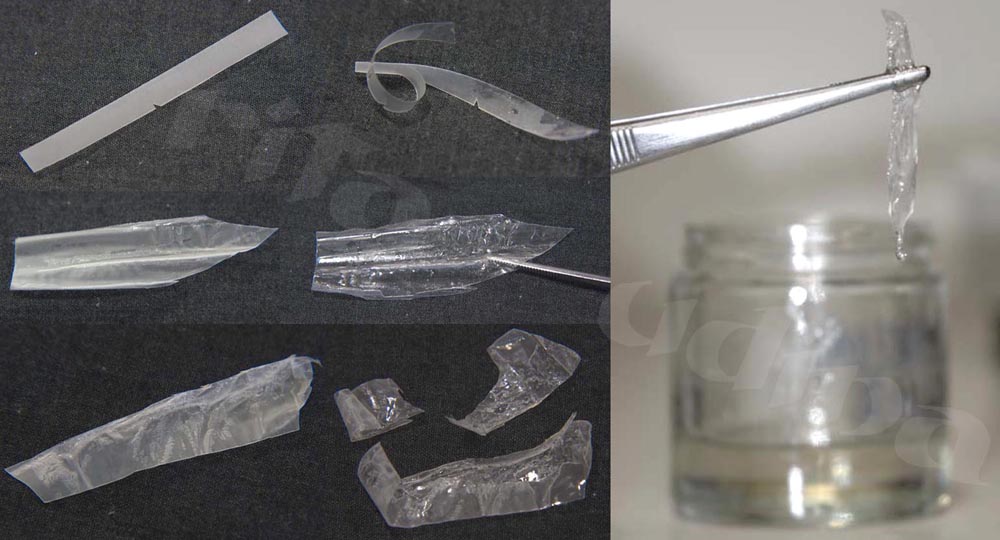 Left: By couples, plastic samples extracted from the edge of the letter, before (left) and after 24 hours (center) of soaking them in several solvents. Right: Tests in the final stage, with the melted plastic by the solvent action.

Options were significantly reduced when trying to use available solvents, which didn’t acidify nor alkalinize cellulose… neither should they erase the text!
Dimethyl sulfoxide was one of the first ones to try because of its low toxicity. It was tested on a tiny cut made at the edge of the plasticized letter, and it definitly succeeded to separate the two layers. However, when it came to test a spot with paper in between, a thinnest layer of paper -the outer layer carrying the ink and some surface fibres- remained attached to the plastic film. So only the inner part of the paper sheet could be removed, leaving the outer ones stuck on the plastic pouch: a total disaster. I guess we could not undervalue the possible presence of poliethylene, neither the most probable presence of ethyl vinyl acetate, which might be only microns thick, but endangered the whole attempt. After several essays we found the right mixture of solvents. Dissolution should be made warm (120-140ºF), with proper toxic gas protection and most patience. 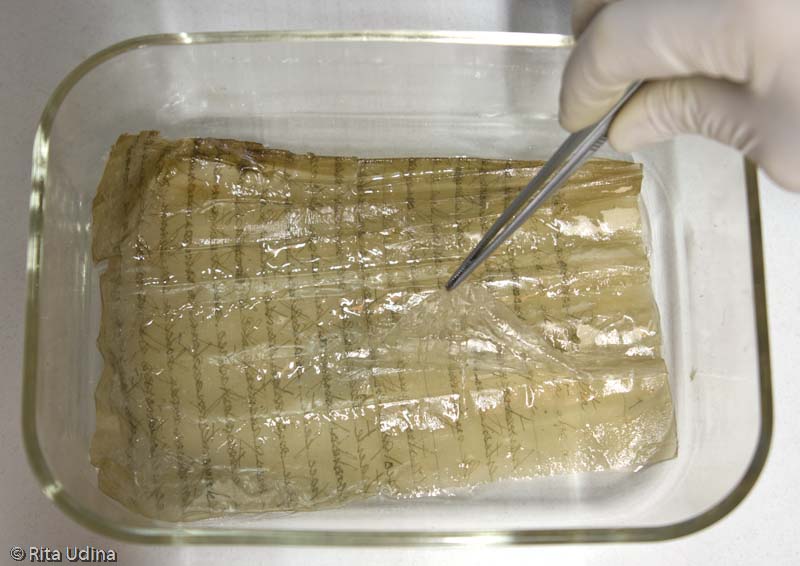 After removing the plastic film, the letter was washed in water, mended, infilled (since some spots were burnt in the laminating machine) and flattened. Once all these treatments were concluded, it was put inside a Melinex® folder (yes: polyethylene terephthalate!), without any melting or sticking, of course. I just wanted to make sure, in case any further temptation arose, that the reversible one would be used, and not another laminating pouch.

Lamination consists on pasting a reinforcing layer (natural or synthetic) to a support. We call it lining when this reinforce is a tissue, which can be either paper or linen (or even a non-woven synthetic tissue such as Reemay®). Since the tissue is adhered onto the support, it has a limited reversibility [5]. We call it lamination when the reinforcing media is a non-breathable plastic, such as the laminatig pouch of this post.
In summary, and concluding:

An encapsulation can also be made out of breathable media (paper, cardboard, Reemay®, Hollytex®) or either with non-breathable ones (Mylar®, Melinex®); and there is even a mixed option (non-breathable and breathable: Mylar® + Reemay®, o Mylar® + paper). We call them indistinctly folder, housing or encapsulation, although the last one is more used for non-breathable plastics (sealed on the four edges).
Encapsulation is 100% reversible because the object is simply stored inside the folder, pouch, encapsulation or housing.

A plastic conservation folder can be very useful to handle very damaged documents, since it provides it a certain stiffness and prevents us from touching it. But we can’t underestimate the risk of condensation (and subsequent microbiological hazard) when the folder is non-breathable in an environement of variable relative humidity (RH) and temperature. As for the rest, conservation folders only involve beneffits [6].

Hazards of a plastic lamination (plasticizing)

Just in case I wasn’t clear enough: Never laminate a valued document with plastic! Not only it is far too complex to remove: it blurs the text when the surface is scratched, folds and wrinkles on the film are irreparable, it increases the thicknes of the sheet, jeopardizes its digitisation, it can provoke the splitting in diferent layers of the paper if the edges of the film open,  it modifies colours, limits (or simply avoids) the possibility of more efficient conservation treatments as well as many analytical tests… But, most of all: it denatures the touch, looks and smell of this ancient suport, paper. Such a sacrilege!

Specifications and considerations on lamination

My suggestion is to leave the idea of shielding documents from everything with a single act, rather than assuming our responsability in their care with simple acts taken along time. Often what is most common sense, is to do what’s been always done: to store the document in a folder, protected by a good quality paper, and most of all, being careful while handling it. As an anti-example for consideration, the case of South Carolina Estate Archives, in which a massive lamination was applied to their most treasured documents, with the cellulose acetate. This technique is not used anymore because it suffers an acidic degradation (also known as the vinegar syndrome), due precisely to the cellulose acetate [7].

2017 SERCA Annual Meeting… and why this silly title?!

The reason I chose this silly title is because this content was first presented and fully explained at the SERCA annual meeting (South East Regional Conservators Association (Atlanta, Georgia, EE.UU): Challenges encountered with adhesives and stain removal (march 3d, 2017), DOI: 10.13140/RG.2.2.36285.97763. I found it hillariuous when I sent the proposal, thinking that in Atlanta everyone had in mind the most famous sentences of the film Gone with the wind. After giving it a second thought, some days before the presentation, I changed my mind, and the title… but I had to face it again when Eva Sander-Conwell introduced my speech with the first given title… so now that I have been embarrassed once, I assume the consequences of this attempt to cheer up potential boring speechs about polymers. Take a look at the facebook album to know more about the event!

Mrs. Candela, for trusting me in such a delicate issue.

[3.] Funny how polyethylene terephthalate, PET, doesn’t belong to the polyethylene (PE) group of plastics but to the polyesters… Nomenclature says so! PET dates from 1941 and it is the base for Mylar® and Melinex®.

[4.] Some references about laminating pouches in particular:

And about plastics in general, within the heritage conservation field:

[5.] And the reversibility depends not only on the tissue and the adhesive, but also on the characteristics of the reinforced support: which technique and sort of paper, etc. Here a couple of examples of linings made at the studio: with linen, japanese tissue…

[6.] Even for the cas of non-breathable pouches or capsules to store acidic paper. Not only because they prevent spreading the acidity to neighbouring objects, but also because this acidity does not accelerate the ageing of the object more than it does when it is stored in a breathable folder. Minter, W.; Baty, J.: The Role of Polyester Film Encapsulation—With and Without Prior Deacidification—On Paper Degradation, Studied Using Long­ Term, Low­Temperature Aging. American Institute for the Conservation of Historic and Artistic Works, 41st Annual Meeting. 29 May–1June 2013, Indianapolis, IN. Research and Technical Studies Postprints., 4, 186-239, 2013.