Sellotapes, Scotch tapes, these pressure-sensitive adhesives to “repair” paper, are part of numerous artefacts from documentary heritage in the need to be preserved. We owe Mr. Richard Drew this fabulous invention in 1925 (or 1930?).
The fatty adhesive accompanying the plastic strip oxidizes and stains the sticked paper, causing with time more damages than benefits. A solid knowledge of writing techniques and solvents will enable a quite satisfactory removal of this greasy glue.

Damages caused by tapes at medium and long term are:

Can scotch tapes be removed? 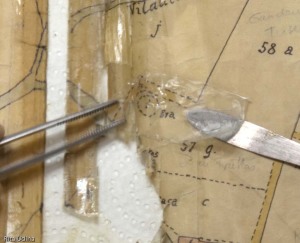 In order to remove adhesive tapes and the stain they cause, several issues need do be considered, such as the kind of paper, but mainly the writing technique (graphite pencil, print, watercolour…) which will determine which solvents can be used. Detail of diazotype property of Regional Archive of Valles Occidental (Terrassa, Barcelona)

Not all damages are irreversible. Both the plastic strip and the fatty remnant can be removed, and it is recommended to do so, because then paper oxidation is stopped.
Greasy stains can be softened as long as the fatty adhesive can be extracted, applying the adequate solvents (which will vary depending on the pictorical technique and the paper).
But when darkening is effect of the chemical degradation of paper, the stain can no longer be removed by physical methods (dragging it with the solvent): we can only resort to chemical treatments, such as deacidification.

Not all fatty adhesives stain the same, neither all kind of papers react the same way at equivalent treatments. 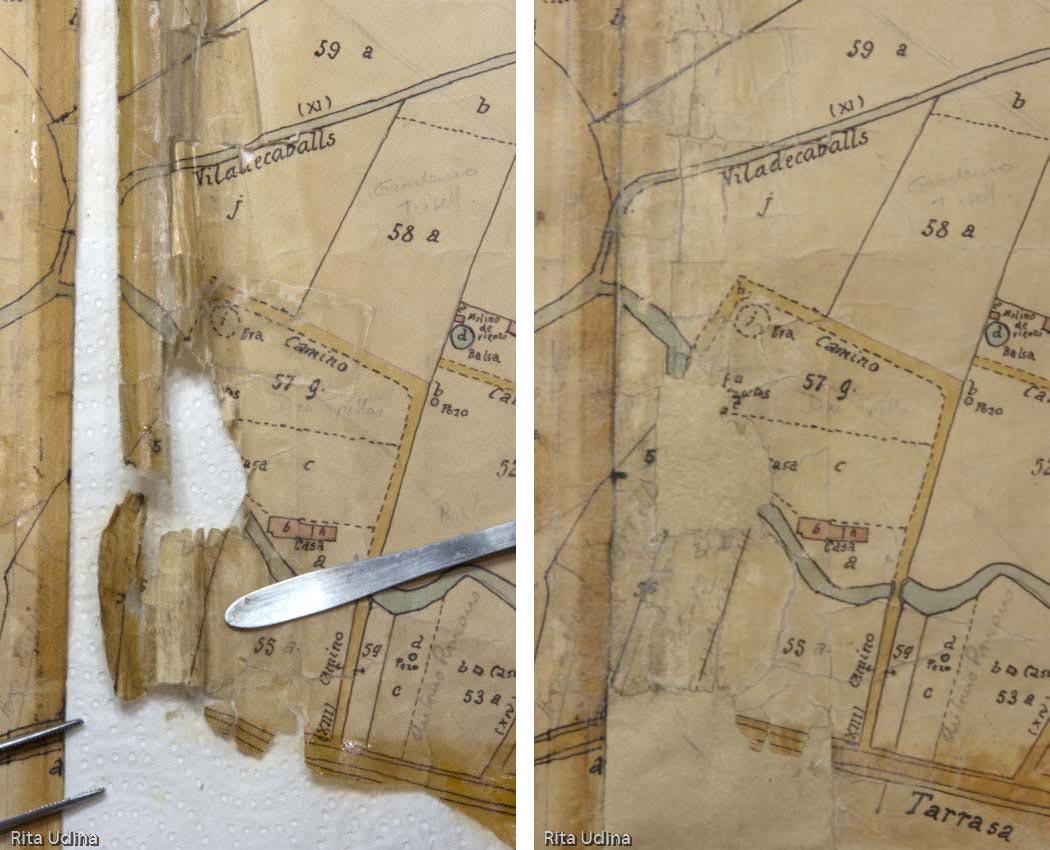 This ink manuscripted and hand-coloured diazotype, had all kind of tapes. The vertical strip on the left is strongly oxidized by an adhesive plaster tape that was in the back. Shorter plastic tapes on the central area did not yellow the paper that much. Left: during the extraction and processing of sellotape grease stains. Right: after tapes removal and fatty stains treatment. Gaps have been inpainted too (neutral tone).
It belongs to large scale album (74 x 54 cm) from 1940. It has folded plans, hand-coloured photo-reproductions (diazotypes). The album is property of  the Regional Archive of Vallès Occidental (Terrassa, Barcelona).