Home / Flattening under tension on paper and parchment conservation

Flattening under tension on paper and parchment conservation

Wrinkles and folds are a usual damage in documents made of paper, cloth and parchment. The common way to restitute these supports to its original condition is by pressure: under weights or in a press.
When the paper has a relief which must be preserved, it is then not possible to use pressure, as it would smash this relief. 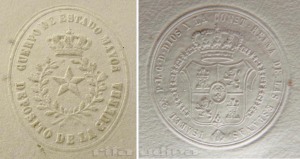 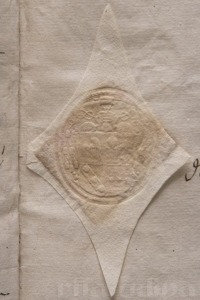 Sealing wax seal on paper. Wax is applied warm and liquid, then a paper is fixed over it, and all sealed together with a metal tampon. Once is dry the sealing wax becomes solid and rigid.

Flattening under tension may be an interesting alternative on certain occasions or when a selective flattened is needed. It takes advantage of the natural shrinkage of the paper when going from wet to dry, so that the tension is given by the same paper. Restorers can regulate the intensity by varying the initial humidity degree. The more wet is the paper at the beginning, the more it will shrink as it dries, so much greater will the tension be. If, however, the sheet is only slightly damp, tension will be moderated. Depending on the type of support and the intensity of wrinkles and/or folds, we might want to do one way or the other. Watch out! if this valuation is not accordingly measured, the paper will tear!

There are variants of the same system depending on the fastening of the paper, cloth or parchment. It can be done by pressure (tweezers, magnets), or by adhering the edges to a rigid support (with paper strips, threads, or other elements)… creativity just opens wider possibilities.

In the case of the wax seal of this bundle, property of the Municipal Archives of Barcelona (Sants-Montjuic district), magnets were used. After washing and deacidificating, sheets were dried by airing, becoming then undulated in an irregular and capricious way. After this cleaning and drying, then the flattening under tension is applied. 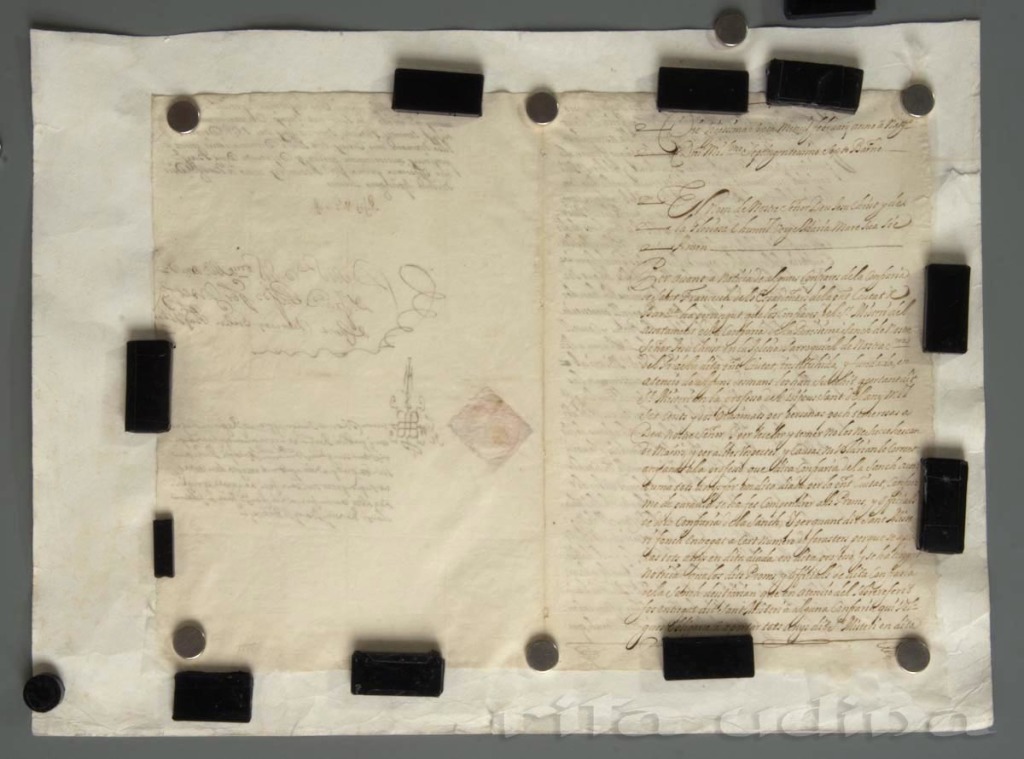 The gray surface is iron, the white on is a blotting paper, and rectangular and circular shapes are magnets that hold the paper on the metal plate. Final phase of flattening under tension.

The paper is placed on a metal surface (there may be a blotting paper underneath) holding the perimeter with magnets and applying moderate pressure, allowed by the dry paper. Then the paper is then moisturized by spraying water. At this point it becomes loose, and it flattens as it dries. Tension is naturally and evenly regulated. The seal was avoided on the spraying, as this area was intended to be kept as it was. It is a quick method that requires no previous preparations.

Bundle from 1705, with wax seal on the right page. Left: before its restoration. Right: before the restoration.

Flattening under tension is very advantageous when the same document has areas with different dimensional stability, that is, they shrink and expand differently. An example is a wax seal (since the sealed part is rigid while the rest of the paper remains flexible). An other example is parchment support, which is a natural membrane. No need to remember that pigs or a sheeps are not flat, they are bulgy and three-dimensional, and if we do nothing, these leathers tend to recover its original shape.

Flattened under tension tightens more on more flexible areas, and is more resilient on  more rigid areas, while no need to do any adjustment on the system. 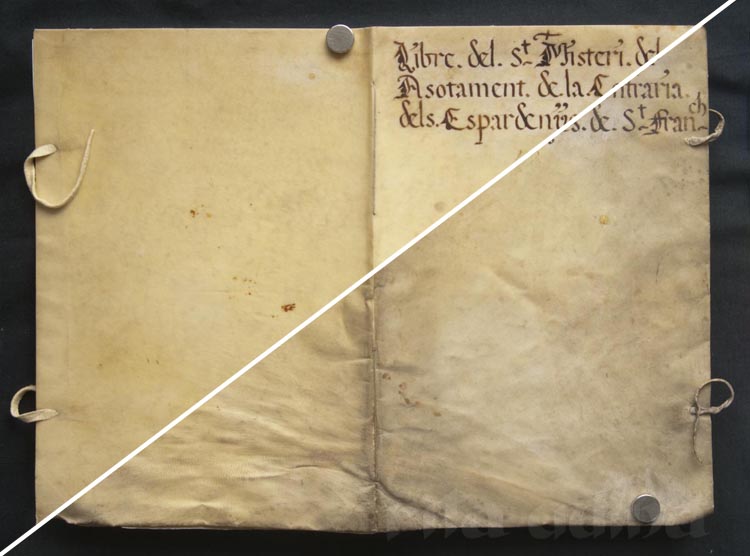 Parchment covers of the bundle from 1705. Photo montage of the previous state (right image) and after the restoration (left image).

With the scroll of the book covers proceeded care, but also because of manuscript art. There was plenty of surface dirt, which was treated with water reserving the written part. To protect the ink during the cleaning did a set. And moisture cleaning process was used to make then flattened by pressure. 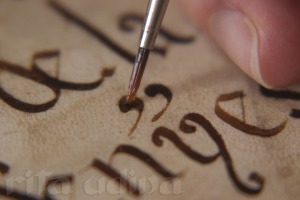 This system ensures -unlike flattened under weight- no migration of ink to blotting papers. So whether the document is written on both sides, or only one, no pressure on the ink layer is held. Pressure is exercised side to side, and not top to bottom. Manuscripted inks on parchment  are very sensitive to aqueous treatments, and therefore a very careful is needed in order not to loose or lessen the ink layer.

Left: Rumpled parchment bundle, with a considerable loss in the cover which and affect the stitching at the top, and the holes of the fasteners (the cover fastener is lost, while the flap fastener remains -on the right-).
Right: Restored bundle. Gaps have been reintegrated with Japanese paper, previously dyed.

When, in addition to the irregular supports, there are several materials, the different dimensional stability varies even more, precisely between different materials. As an example, this parchment bundle where the loss was infilled with dyed paper.

This time the initial condition was quite wet. The fastening was done with clips, not magnets. And instead of a metal plate a carboard was used -what’s usual for clips-. The inconvenient is that a cardboard must be cut to size for each object, but has the advantage that it is safer for delicate materials (such as this one, which had a profusion of tears and gaps that could easily be enlarged). If tightening is too high, cardboard tells us becoming undulated, which would never do a metal plate when a skin or paper stretched it. The iron plate would remain intact and the weak supports (parchment) would tear or break. 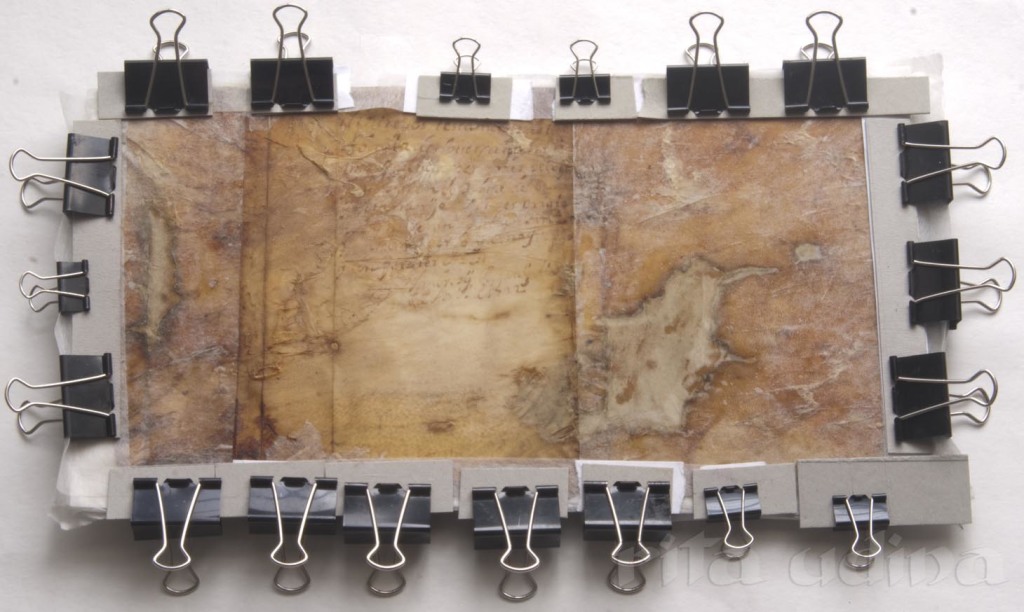 Flattening under tension, fastened with clips on the perimeter. Under the parchment there is a blotting paper and the cardboard.

We can modulate the tension as the parchment is flattening (and shrinking), adjusting the position of the clips, or even reducing the area of the cardboard.