This holding suffered a flood in 2011 , reason why these documents became severly damaged (microbiologicaly and by insects). The mould treatment also involved tears and losses repair, and new binding for the most damaged books. The overall holding is abou 4 lineal meters.

The infection in some of the documents had severely damaged the content of the boxes (left). Losses have been infilled, and fragile areas have been consolidated and mended (right).

The infection damaged the bindings (left) which were considered worth re-binding (right), instead of preserveing the original bindings. The text block was previously disinfected. 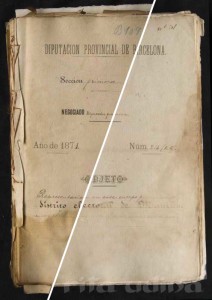 Tide lines and stains were washed, after the mould treatment. Photomontage of the two images of the same object along the treatment