The conservation department of books and documents of the Instituto del Patrimonio Cultural de España (IPCE) is studying nanoparticles and chemical gels in the context of a vast European research project (Nano for Art) which has a trajectory of three years. This investigation seems to open the door to much more effective future

working methods, easier and safer. And at last newest technology is applied to paper conservation, and not only painting or sculpture (with all my love for these two!). The greater porosity of cellulose and graphic supports in general (compared to stone or painting layers) shows the different needs of our discipline, which may not always benefit from technological advances on paintings and sculptures. At the documents and books department of IPCE they study these specificities to implement them on documentary heritage.

Nanoparticles are those of nano magnitude (10-9) i.e. sooooooooo very small particles. The same mass of any “nano” product has globally greater surface than the same amount of the regular product, in which particles are larger but less numerous. This makes nanoparticles more reactive, as there is more contact surface and fewer unreacted product. Then with fewer amount, we get the same effect that could be obtained with the same product with higher scale particles. In practice, and greatly simplifying the talk that gave us Emma Sánchez at the Institute, the main advantages of nanoparticles are: An equivalent concentration of the same chemical (calcium hydroxide, for example) penetrates much more easily among the paper fibres so that the chemical not only interacts more homogeneous and thorough with them, but lowers the probability of creating whitish areas on the paper surface, or may just not take place at all. And that is especially interesting in its application to deacidification, which often blurs the intensity of black or brown inks. But, above all, because the further the product penetrates into the document, the more complete is the deacidifying effect. When the particle diameter is smaller, it fits in narrower spaces among the fibre weft and so its effect is deeper throughout the paper. 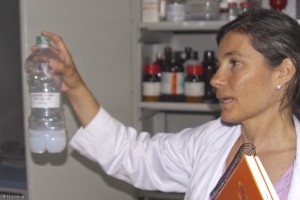 I am struck by a solution of calcium hydroxide in water that rather than staying in the bottom of the bottle as a sediment, remains permanently as a homogeneous aqueous dispersion, never precipitating. Emma also tells us how this research has opened her eyes about the deacidification process, as we usually apply it without much variations, but there are really lots of variables that should be considered: the natural recess suffered by the initial pH increase after a few days, the thickness and type of paper, among many others. 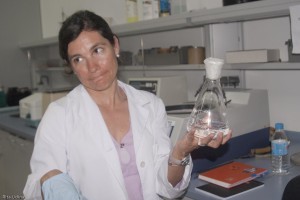 If the benefits of nanotechnology have immediately convinced me, the promising chances of chemical gels leave me speechless: I want to apply them NOW! When will we be able to buy them, Emma? That will still take a long way… she says, but studies are certainly very promising. Physical gels are formed by a thickener (agar, Klucel, Carbopol, Methylcellulose… the ones we know) and a vehicle (water or any other solvent, or mixture of them). The grid is formed by monomers or polymers linked to the vehicle by weak bonds.

Chemical gels differ from physical on the bonding, which is covalent type. Covalent bonds are much stronger than the hydrogen ones. They are not fazed by pH or temperature changes nor other conditioning to which physical gels are subdued. “Inter-penetrated” because there are two independent polymer reticulum (hence semi) but intertwined. One is formed by the vehicle (same as physical gels), and the second one is synthesized by the solvent in presence of the first.

And what does this mean? First of all that we can work with them in a wide variety of conditions, but, the most interesting to me is that it doesn’t wet. Water retained (when this is the vehicle, that could be other: ethanol, acetone, isooctane…) does not escape from the mesh of the gel: stays there. The concentration is stable because of the strong covalent bonding, and does not migrate to the support in which it is applyed. Can you imagine? At last real possibility to apply a gel on a gouache, parchment manuscript or even an illuminated capital letter? Possibilities are endless! Because, let’s be honest, doing this with physical gels carries important risks, as part of the vehicle can wet the support, even when working extremely carefully. But that isn’t so with chemical hydrogels: they moisture the substrate such that the hydrophilic dirt migrates to the gel, but without thereby creating damp stains, since the vehicle is always retained in the gel. The example they show us on a parchment is clearly effective, because the action of the gel does not exceed an inch on the area in which it was applied.

can give it the exact desired shape with absolute certainty that it will only act there. Just as humectant method it is already extremely useful: A wrinkled parchment has been completely hydrated remaining dry to touch, explains Carmen Peña, restorer involved in the research. And let’s not limit to water: I’m dying to apply it in scotch tapes and greasy stains without all the trappings… Hopefully the project continues delving into the paper section and soon we will be able to use them!

Dedicated to Emma to whom I am so thankful for the fantastic visit to the ICP and the wonderful explanations of nanotechnology and hydrogels.